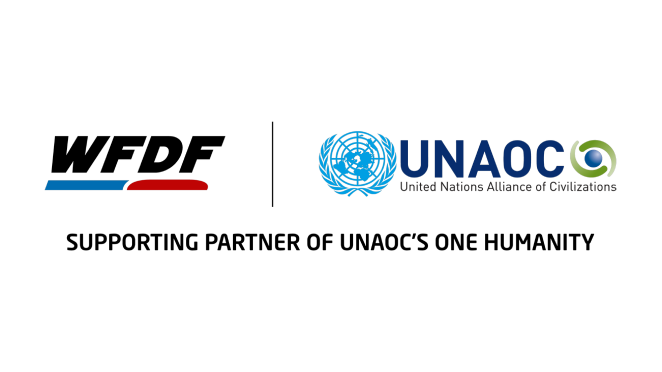 The World Flying Disc Federation (“WFDF”) is pleased to announce that WFDF has joined the UNAOC One Humanity Campaign, which calls for solidarity, compassion and unity in the face of discrimination and divisiveness. The International Federations which sign up to the initiative have pledged their commitment to the United Nations Alliance of Civilizations’ (UNAOC) campaign. The campaign will see signatory sports champion One Humanity by demonstrating their commitment to peaceful and inclusive societies through a range of initiatives and projects that will be featured on a dedicated online platform in future to increase the visibility of this important campaign.

“WFDF strongly believes in the values promoted by the UNAOC One Humanity Campaign which are quite similar to the WFDF core values embraced by flying disc participants, players and athletes around the globe, displaying a unifying spirit that leads to lifelong friendships, camaraderie, teamwork, and loyalty that transcends cultural, geographic, political, and religious differences,” commented WFDF President Robert “Nob” Rauch.

“WFDF again is willing to take a lead as one of the earlier IFs joining the campaign of the United Nations to promote the common values of friendship, sport for society and peace, a better world, and contribute to the global project as a further stepstone to visibility on the international platform showing the importance of the human rights,” added WFDF Executive Director Volker Bernardi.

“UNAOC, as the leading United Nations initiative to advance understanding, cooperation, and dialogue among nations and peoples across all cultures, has recognized the ability of sport to further its call for promoting diversity and positive social change. Through the One Humanity campaign in particular, sport, together with the Alliance, will promote diversity as an advantage rather than a threat.” stated Miguel Ángel Moratinos, UNAOC High Representative. “

Under the agreement, WFDF specifically commits to promote the “Alliance Of Civilizations” platform by means of a set of activities to be implemented directly by WFDF or indirectly through its network of partners by the following actions:

Information about the Alliance of Civilizations can be found at https://www.unaoc.org/who-we-are/