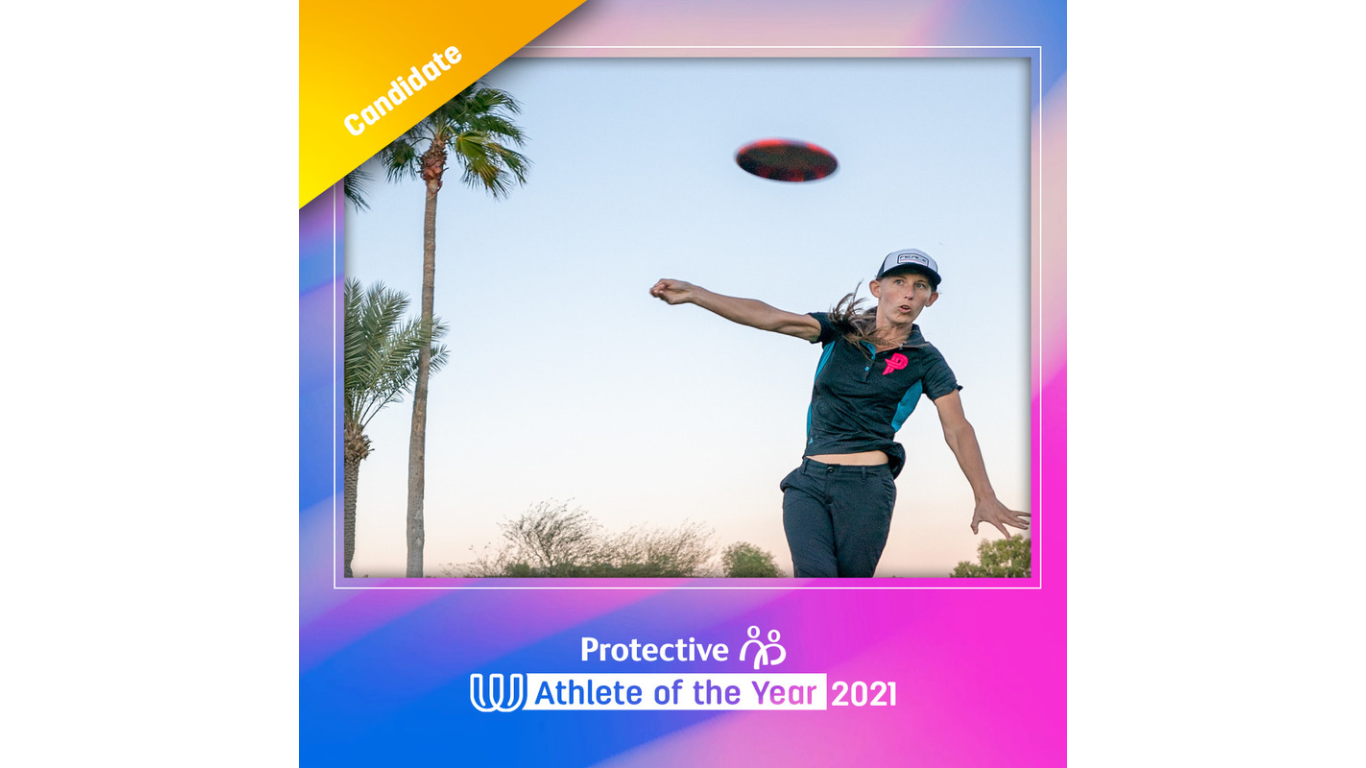 Voters can cast votes once every day for the candidates

The World Flying Disc Federation (WFDF) has nominated Paige Pierce in the The World Games annualAthlete of the Year competition. The award honors an athlete or a team for their outstanding performance in 2021 or for their social commitment or particularly fair behavior.

Paige Pierce is the most successful woman Disc Golf athlete in the history of the game. She has won five World Championship titles, has the highest rating of any woman at any time since ratings began and is the top prize winner.

“She has continued her progress as a player throughout the pandemic and for all of  2021 and is a true representative of the sport and a role model for all women aspiring to achieve greatness in any sport,” said Charlie Mead, the chair of WFDF’s Disc Golf Committee.

Paige was born and raised in Plano, Texas. She began playing disc golf at the age of 4 with her father and his friends. She went professional in 2009 and started touring in 2010. In addition to holding numerous Professional Disc Golf Association (PDGA) National Tour wins, she is the all time leading women’s winner on the Disc Golf Pro Tour, with 31 DGPT wins.

“We are particularly excited about this competition as The World Games competition is being held in Birmingham, Alabama, USA after being postponed last year due to the pandemic,” stated WFDF President Robert “Nob” Rauch. It’s an honor to put forward such a successful Flying Disc athlete and we are excited that Disc Golf will be featured as Demonstration sport at the Birmingham event in July this year.”

The flying disc community can support Paige by voting once every day. Voting begins at 09:00 CET on Monday the 10th of  January 2022. Each participant can cast votes for the candidates once per 24 hours on The World Games website. Each time, votes must be given to two candidates: two votes to your first-choice candidate and one vote to your second-choice candidate. The top 10 vote-getters as of the 23rd of  January will move on to the finals. The winner will be announced on the 31st of January.

The candidates for World Games Athlete of the Year competition come from 17 nations and four continents.

Past Flying Disc nominees for this honor include Seattle Riot and U.S. national team player Dominique Fontenette and Team Finland, who won the WFDF World Team Disc Golf Championships in 2019, both finishing in 9th place of 25 candidates, and Team USA was elected as the winner in 2013 after their World Games championship in Cali.

To vote for Paige Pierce and learn more about all the candidates in the 2021 Athlete of the Year competition, visit the website: https://www.theworldgames.org/awards/Athlete-of-the-Year-2021-94