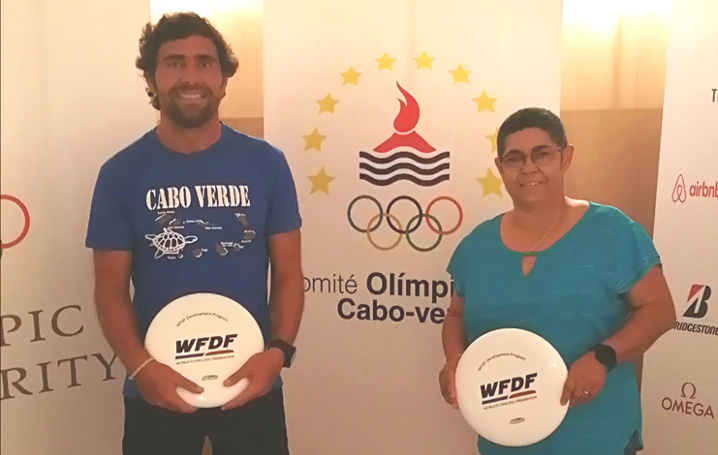 With funding from the WFDF 2022 Development Programme, José Amoroso, WFDF Spirit of the Game Committee chair and professor of the Polytechnic of Leiria, promoted the practice of disc sports with children and young people from Cape Verde in early July 2022.

“To disseminate and make known disc sports and promote its practice with young people, particularly across borders, is one of my great objectives,” saidAmoroso, professor at the Higher School of Education and Social Sciences (ESECS) of the Polytechnic of Leiria. Amoroso visited Cape Verde at the beginning of July to train Cape Verdean teachers for the teaching of disc sports, within the framework of the project “Ultimate and Disc Sports in Schools” developed in Portugal in 2014 by Amoroso and now co-funded by WFDF.

“The visit to Cape Verde took place under the development program of the World Flying Disc Federation (WFDF) of which José Amoroso is a board member, with the delivery of 1,200 discs to 120 schools, and the offer of 100 manuals “Ultimate and Disco Sports in Schools”, authored by José,” added WFDF President Robert “Nob” Rauch. “WFDF is proud to build on the presence of Flying Disc Freestyle as a demonstration sport at the first African Beach Games in Sal, Cape Verde, in 2019, and bringing Flying disc sports to every school on the Island.”

“This visit aimed to empower teachers from Cape Verde to teach the different modalities of disc,” explained Amoroso. “We can offer the school kits, but if there is no such follow-up and this training, the material easily gets shelved.” Amoroso was in Cape Verde between July 6 and 9, in an initiative supported by the Maria Helena Andrade from the Ministry of Education and Filomena Fortes from the Cape Verdean Olympic Committee.

The contacts established in Cape Verde open the opportunity to hold an event in Sal Island in 2023 or 2024. “Ultimate Frisbee and disc sports have relevant educational characteristics in the context of school learning. The sport is one of the few sports practiced without referees, promoting self-regulation and concepts related to ethics in sport, fundamental for harmonious and eclectic growth on the part of students”, stresses the professor of ESECS. “In this first phase we want to give time to realize the project and get it to schools. Later, we will then promote an international competition for the population of Cape Verde, which, at the time, will already identify more with disc sports,” he added.