Guts is one of the team events in the flying disc sports. It is played by two teams of five players each. The official disc of the game is the Pro model frisbee disc. For informal play, a lightweight, blunt-rim disc such as the 100 G DDC is sometimes used. The playing field consists of two parallel goal-lines 15 m in length and 14 m apart. The teams stand in line opposite each other. Each team defends a goal- line. The disc is thrown back and forth between the teams. The object is to throw the disc through the line of defending players.

No Referee:
As with other frisbee sports such as Ultimate and Disc Golf, there is no referee at Guts. The players at Guts are responsible for the game according to the principle of Spirit of the game.

A disc is thrown only when the players of the receiving team stand on their own goal line. The defenders stand an arm’s length apart so that their fingertips can just touch each other. The thrower must stand behind his or her own goal line. A correctly thrown disc passes the goal line of the receiving team topside up and within reach of at least one defender. Players may not throw the disc above the extended reach of the receiving team. When the throw was not correct the receiving team scores a point. If a disc is thrown correctly, a player of the defending team must catch the disc with one hand. The disc shall not touch any two parts of the defender’s body at one time. Also the disc shall not have touched the ground. Each time a total of eleven points is reached, the teams change the goal line they are defending. With the score at 20-20, play continues until one of teams leads by two points.

TIP:You can always play with fewer players on a team 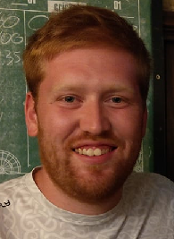 Adam has been the on the board of USA Guts since 2018. As an athlete, he has played Guts since 2010 and he represented Team USA at the World Ultimate and Guts Frisbee Championships in 2012 and 2016, winning gold in 2016. An active competitor, he was named Most Valuable Player at the International Frisbee Tournament (IFT) in 2018. He was also the team Captain and Club President on his college Ultimate team. Adam is the Associate Accountant at the University of Wisconsin – Steven Point, where he received his Bachelor’s degree in 2016.