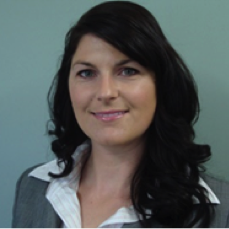 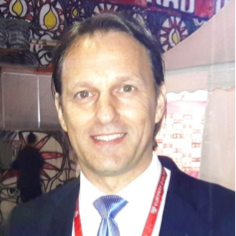 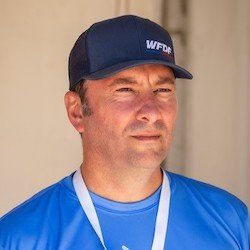 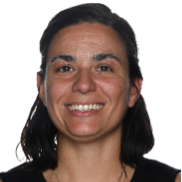 Director of Communications and Global Media 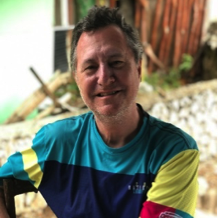 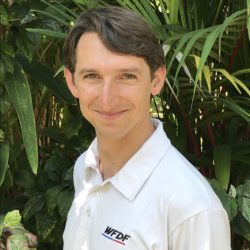 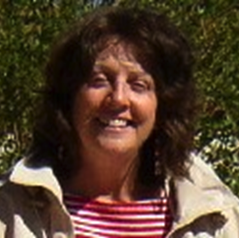 Volker Bernardi has been the Executive Director of WFDF since 2011. He was educated as a sports lawyer and has been serving as Senior International Sports Administrator and Consultant for a period of more than 21 years supporting the development of several national and international Sports Federations. He is currently a member of the Executive Committee of the International World Games Association (IWGA). He is a former Administrative Director of the International Canoe Federation and his professional stages include the position of Sports Coordinator for High competitive sports, national/international sports coordination with the Ministry of the interior affairs/sports Saarland. He has also represented several cases in front of the International Court for Arbitration in Sport (CAS). Bernardi holds a MEMOS Master degree (Executive Master of Sports Organisation Management) from the University Claude Bernard Lyon (France). He graduated from first and second state examintation as lawyer from the University of the Saarland, Saarbrücken.

Karina has served as the Managing Director, Events and Operations for WFDF since 2014.

She has been involved with professional sporting teams and major events management over 20 years, getting her start in both Australia and New Zealand. Before taking time to start her family, she served as the senior events services director for the FISA World Rowing Championships from 2008 to 2010 in Karapiro, New Zealand. From 2006 to 2008 she was Director of Operations of Elephant Management Co. Ltd. V8 Supercars, an event with over 182,000 spectators over three days.

From 1999 to 2006, she was involved in a variety of events, including the Subaru Rally Team of Australia (Motorsport), Canberra Cannons (Basketball) and Canberra Raiders (Rugby League). She is also the owner and Director of several New Zealand companies, all of which are involved in the motorsport industry. Karina has significant experience on all aspects of event issues like accommodation and transportation, registration, and all other organisational aspects of World class events. A natural born English speaker, Karina is also fluent in German.

Igor Jankovic has twenty years of experience developing soccer at local, national and international levels. Currently, Igor works part-time as a Business Development Consultant for UEFA, helping federations and clubs evaluate their programs and create clear action plans to improve the performance of each player within the organization. Formerly he was Head of Development at the Serbian Football Association for 8 years. He also founded The Serbian Children’s League, from which the majority of players came for the Serbian Youth Teams to win several UEFA and FIFA Championships. Igor holds the UEFA A license, earned an Executive Master in European Sport Governance (MESGO), a Masters of Science in Management from Faculty for Management Braća Karić, and a degree in Economics from Faculty of Business in Sremska Kamenica. He lives with his family in Belgrade, Serbia, and speaks BSCM, English, Slovenian, Macedonian, and Bulgarian, along with some Dutch, Russian, and German.

Patrick Fourcampré-Maye started playing Ultimate in Dubai in 2009. He organized the United Arab Emirates' first national team representation at WCBU2011 and along the way co-founded DubaiUPA and United Arabian Ultimate, which is the WFDF member association in the UAE. He hosted WCBU2015 as Tournament Director and has worked over the years with players and various groups in the region to foster development of the sport. He has a long history of volunteering and involvement in major events globally, and has worked in the capacity of WFDF Tournament Technical Director for both grass and beach events. A professional aerospace engineer and project manager, he currently also has a part-time position as Test Systems Manager for Vital Link Europe Ltd. Patrick, a dual UK and French national, will work out of the city of Dubai, UAE, where he currently lives with his family.

Director of Communications and Global Media

Jen Thomas joined WFDF in 2017 as the Director of Communications and Global Media after relocating to the U.S. from the United Arab Emirates, where she was the Media Coordinator and a member of the Executive Board of United Arabian Ultimate, the WFDF member association in the UAE. She had previously worked as the Media and Communications Coordinator for WCBU2015 in Dubai. An active club player, Jen competes in both Mixed and Masters divisions in the Bay Area and has competed in four WFDF world championship events. In California, Jen works for the Bay Area Disc Association as the Facilitator for the Girls’ Ultimate Revolution Leadership Series, in addition to her full-time job as a digital producer at the San Francisco Chronicle. She has a masters degree from Northwestern University in Journalism and graduated from the Massachusetts College of Liberal Arts with degrees in English/Communications and Philosophy.

Tim Rockwood was a competitive Ultimate player from 1976 to 1982, as a founding member of the Middlebury Pranksters (Vermont) and co-founder of EARTH Ultimate (New York City). Since October 2015, he has served as WFDF’s Managing Director of Broadcasting and Marketing and Executive Producer of the 2016 WUGC (London), 2017 WCBU (Royan, France), 2018 WUCC (Cincinnati), and 2019 WU24 (Heidelberg) tournaments. As a network sports television and documentary film producer and executive, Tim earned senior production credits at ABC Sports (1984 Winter and Summer Olympics), ESPN, and Turner Broadcasting (Goodwill Games, NBA Basketball, IAAF and USA track and field). In addition, Rockwood was Acting Director of the Discovery Health Channel, Senior Editorial Producer of Ted Turner Documentaries, Executive Producer of 2011 Official Sundance selection The Last Mountain, about mountaintop removal coal mining in West Virginia, and producer of documentary films including A Motherland Tour, about maternal health, HIV/AIDS, and malaria in Africa, How I Got Over, a story of 15 previously homeless, incarcerated, drug-addicted women who use theatrical role playing as rehabilitation therapy, and co-executive producer of FLATBALL – A History of Ultimate. He is a Political Science and German graduate of Middlebury College.

Luke started playing Ultimate in 2003 and has struggled to stop playing since then! He has founded a number of teams in the UK and worked as a coach and team manager with youth teams, club teams and national teams over the years. He has represented both Great Britain and Poland, as well as numerous club teams, on the international stage on both grass & beach. He continues to play Ultimate primarily in the Masters Division. Since 2008 he has been ever increasingly involved in tournament organisation hosting over 30 tournaments in the last decade ranging from founding the London Indoor League to hosting WFDF 2015 World U24 World Championships. He has worked in every conceivable volunteer role at major ultimate events, culminating in volunteering in the capacity of WFDF Technical Tournament Director. Luke is currently working hard as the Competition Director preparing for the WUGC 2020/21 in Leeuwarden. As an IT Professional Luke has worked primarily in the education industry for the last 12 years and is currently the IT Manager of the St Albans Independent College. In recent years he has started consulting with a variety of small to medium sized organisations on how best to leverage Information Technology to meet their aims. Luke is fluent in English and Polish, as well as some French & German. He is a Philosophy graduate of Lancaster University and currently splits his time between St Albans, UK & Darmstadt, Germany.

Dan "Stork" Roddick is a long-time disc sport champion and organizer in both the U.S. and internationally. Stork was an early star of the game of Ultimate with college champion Rutgers University (with a record of 45-1), and he was a winner of national and world championships in individual events including disc golf, freestyle, and accuracy.

Stork was one of the driving forces behind promoting and supporting Ultimate and all other disc sports through his role as head of Wham-O’s sports marketing department from 1975-96, ensuring sufficient financial support for the organizing bodies in the USA early in their existence. Stork was also was instrumental in the international arena, serving as World Flying Disc Federation President from 1986-1992, Chair of the WFDF Rules and Individual Events Committees from 1993-2004, and as secretary and executive director from 1998-2003. He continues in his role as Director for Special Projects for the PDGA. An Eagle Scout in his youth, Stork has written numerous articles and books on disc sports, and he is credited with framing Ultimate’s defining "Spirit of the Game" philosophy which has guided play since the late 1970s. He has been inducted into the Frisbee, Disc Golf, Freestyle, and Ultimate Halls of Fame. Outside of his disc sports career, he served as a college lecturer in sociology and as a writer and consultant. Stork received his PhD in sociology from Rutgers University and is a long-time resident of Pasadena, CA.

Deborah has served as Bookkeeper for WFDF since 2016. She retired in 2015 as Chief Financial Officer after 12 years with the US Olympic Committee NGB of USA Table Tennis. She was introduced to USA Ultimate as their interim accountant for several months in 2015. Prior to moving to Colorado in 1999, Deborah owned an accounting practice in San Francisco for 20 years. She has a Bachelor of Science in Business/Accounting Specialist degree from the University of San Francisco.